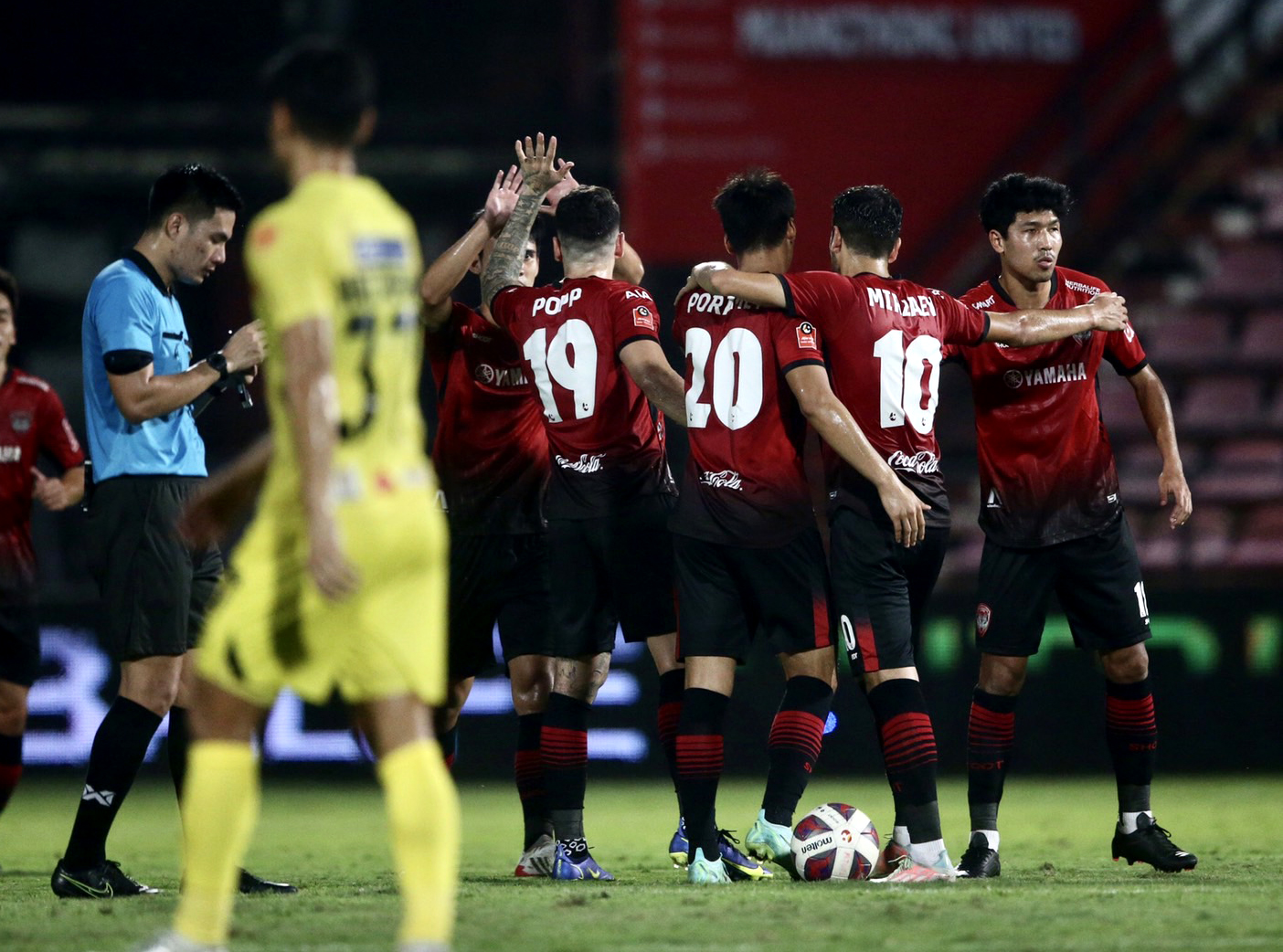 Muangthong United ends the first leg of the 2021-22 Thai League season with a solid 4-1 victory.


Heading into the match Muangthong were missing centre backs Chatchai (yellow card ban) and potentially Lucas Rocha (injury).  Good news greeted fans, however, when Lucas surprised all and made the starting eleven.

Lucas was a welcomed sight as tonight’s opponents from Thailand’s Nakhon Ratchasima province (the SWATCATS) are capable of putting in goals. The Swatcats have been struggling, but the return of Austrian player Marco Sahanek from injury was seen as a boost.

Otherwise, the starting lineup for Muangthong featured the core of the team, with Picha and Weerathep in the midfield roles, Wattanakorn and Boontawee the wing-backs, and foreign players Willian Popp and Sardor Mirzaev on the attack.  The remaining slots were filled in with Thai-Italian player Marco Ballini alongside Lucas, Wongsakorn the other midfielder, and academy striker Korawich.

Peerapong was the goalkeeper of choice.

Muangthong United was quick onto the scoreboard.  Uzbekistan international Sardor Mirzaev put pressure on the keeper, recovering his shot and cutting the ball back through the box to Brazilian Willian Popp. With time on his hands, Popp took the ball towards goal and hammed it over the heads of three defenders parked on the line.

Soon after The Swatcats replaced their injured goalkeeper, and backup goalie Pisan Dorkmaikaew took his place between the pipes.

Although Muangthong United dominated, the Swatcats created chances.  Peerapong needed to be sharp on a shot from Ghanian attacker Karikari, hit low and on target as Lucas attempted the block.  Peerapong juggled the ball for a moment but secured his grip with Amadou Ouattara (Ivory Coast) charging in.

The second goal of the half came when Muangthong United’s academy player Korawich Tasa ran the ball in from the midfield. Beginning with a sweet turn off a pass from Picha Autra, Korawich eluded two defenders before his hard shot from close in was under the lunging Pisan.

There were no changes to the squad at the top of the second half, and Muangthong United continued to dominate play.

Korawich Tasa was to have a chance at a second goal trying to tap in a short pass at the near post only to see the ball slip wide.

Muangthong United’s manager, Mario Gjurovski, used a full slate of substitutions as the second half continued, calling into action many of the academy players who this season have been brought to the first team.

Defender Suporn and attacking midfielder Poramet Arjvirai were first to enter, followed later by Sorawit and Peerapong.  Picha Autra and Weerathep were pulled out and rested as both players have been called to Thailand’s national team for the upcoming Suzuki Cup competition.

Poramet was to add both a goal and an assist before time was up.

The goal came about as Willian Popp laid a pass forward that Poramet ran onto from the halfway line.  One-on-one with the keeper, Poramet manoeuvred to his right to score.  The play was called back as offside, however, the VAR review confirmed Poramet had managed to elude the trap.

His assist came about in a similar style, running the ball in one-on-one from the halfway line, this time laying off a pass to Willian Popp who was able to catch up and then finish into the empty goal.

The Swatcats almost had one back when Philippine international Dennis Villaneuva headed the cross off the post. Villaneuva was born in Italy and developed through Lazio’s youth system.  He’s since made 14 appearances for the Azkals.

A freekick awarded to the Swatcats a few moments later resulted in their only goal of the match.  Muangthong United defenders Lucas Rocha and Ballinin failed to clear the low shot which found the far side of the goal.

The Thai League 2021-22 season first leg has come to an end and games begin again in January.

During the break, Thailand will compete in the AFF Championship, known as the Suzuki Cup.  Hosted by Singapore this time around, the Suzuki Cup features ten teams from the region.  Thailand has won the cup more than any other nation, however, in recent years Vietnam, Malaysia and others have been challenging for the title.