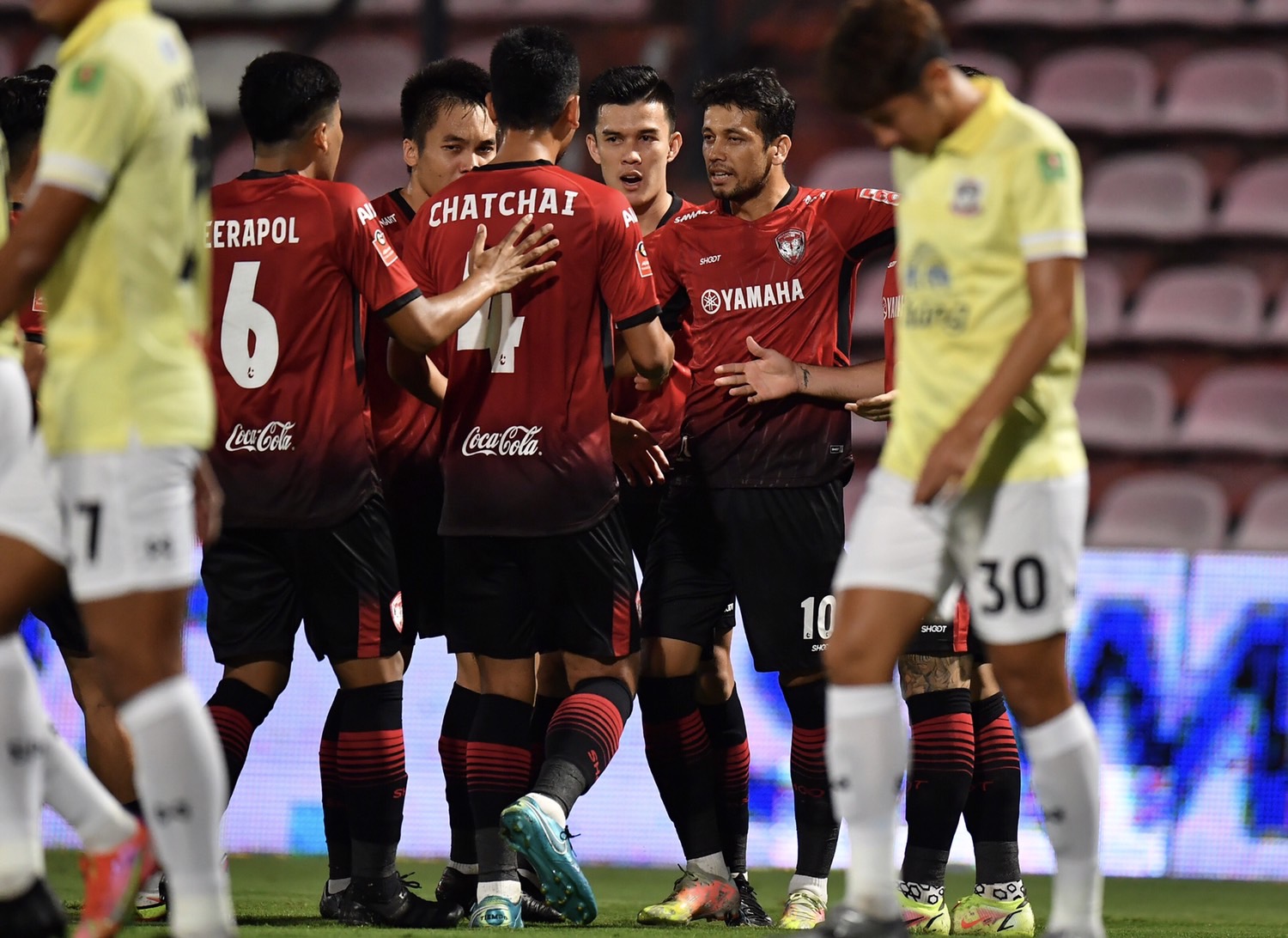 With head coach/manager Mario Gjurovski banished to the stadium stands, assistant Dagno Siaka took charge from the touchline, although in frequent communication with his compatriot during the match.

By halftime, it was unclear which team would have the victory.  With a steady stream of games, Gjurovski was forced to rotate into the starting line up several reserve players and rest key starters, including the injured centre back Lucas Rocha.

This was a chance for youngsters Poramet Arjivrai, Purachet Todsanit, and Marco Ballini to have an impact on the season, alongside regular starters Picha Autra, Uzbekistan international Sardor Mirzaev, and Brazilian winger Willian Popp.

The plague of the first five minutes struck again as Muangthong United conceded an early goal.  A free-kick into the box went untouched by anyone on either team and entered the back of the net.

Just a few minutes later Suphanburi suffered a similar fate with Mirzaev’s free-kick deflecting off the wall and catching the keeper going the wrong way.

Muangthong United dominated most of the play but was vulnerable to the counterattack.  Both teams had chances to score, including a ball off the post by Teeraapol, but the finishing was not there and the squads entered halftime with a 1-1 stalemate.

Coach Mario was able to pep talk his players at the half, instilling in them a need to attack with more intensity and find the winning goal. The result was evident in the second half as Suphanburi were pinned down and scrambling.

Muangthing United wingback Boontawee Theepawan was instrumental in the build-up to the winning goal, releasing Picha Autra down the right-wing who then chipped the ball across towards the penalty spot as Sardor Mirzaev ran on to the header.

A series of substitutions for the final twenty minutes to rest sore legs followed, and even though Suphanburi were able to create several good scoring opportunities the equalizer did not happen.  Boontawee, along with his assist, also prevented a goal when he positioned at the near post on a corner and chested the ball clear.

Muangthong United almost went up 3-1 in the final minutes when Korawich Tasa found himself on a breakaway and slotted the ball past the keeper.  The celebration was quickly cut short, however, with an offside call.

Muangthong United have just two days of rest and recovery, playing away to Samut Prakan City FC on Wednesday, November 10th.  Then the Kirin are back at The Thunderdome on Sunday, November 14th, 6:00 pm, against Chiang Mai United from Thailand's northern province.