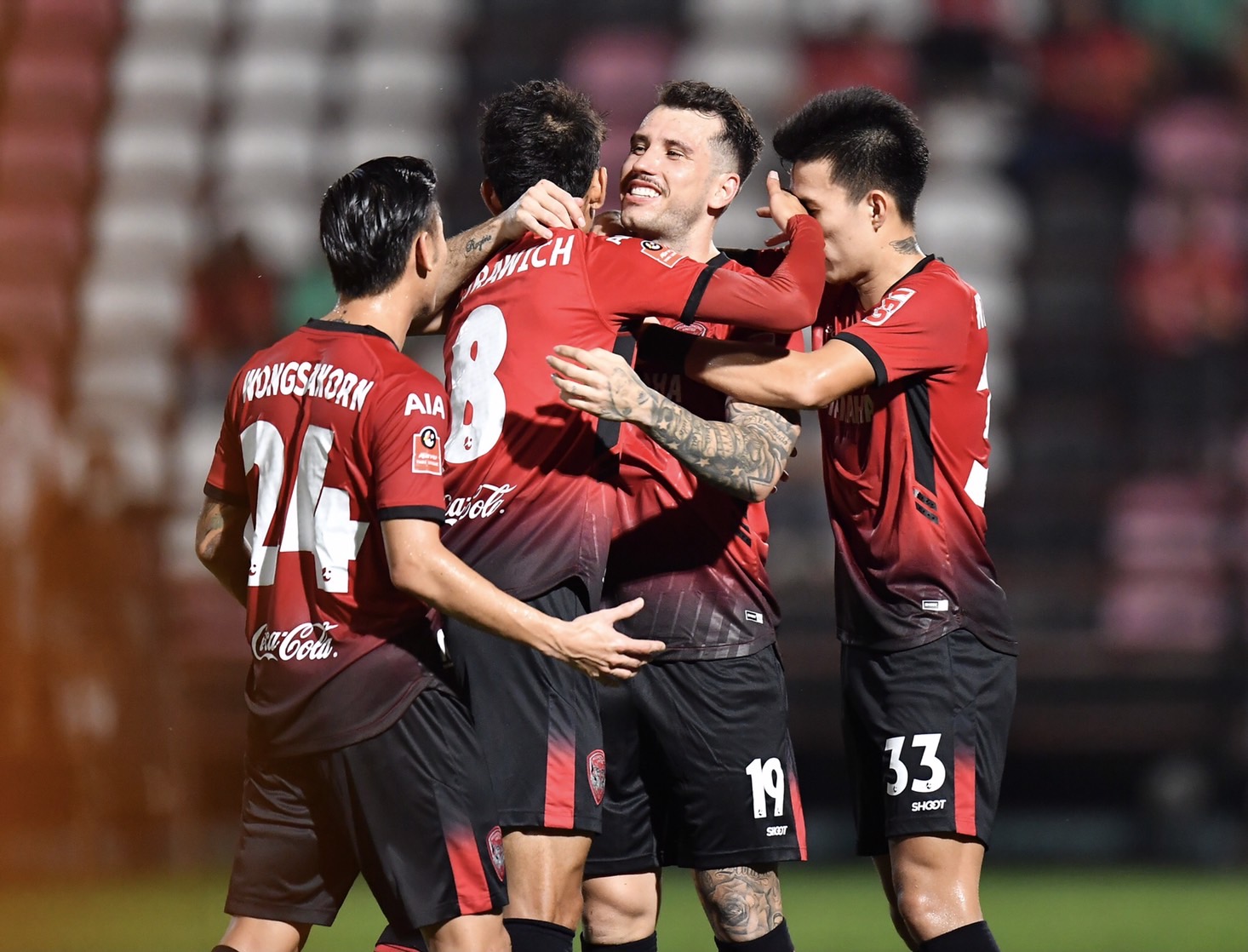 With just a few days of rest since their mid-week draw at Samut Prakan City in southern Bangkok, Head Coach Mario Gjurovski rested Chatchai Saengdao, electing to give Brazilian centre back Lucas Rocha the nod, partnered with Marco Ballini.

Poramet Arjvirai returned to the starting line-up on the attack, along with Purachet, and Picha Autra remained as the engine of the squad in the midfield.

Although the first half ended 0-0, Muangthong United was clearly the dominant team over bottom of the table Chiang Mai United.

Chiang Mai's keeper, Nont Muangngam, on loan to the club from the neighbouring province of Chiang Rai, was outstanding.  Not only did he deny Purachet's curl towards the far post, but he was also all over attempts from Sardor Mirzaev, Willian Popp, Korawich Tasa, and others.

The match easily could have been a 4-0 thumping.

Chiang Mai United had a solid chance with Ivory Coast forward Yannick Boli escaping from Lucas Rocha.  Boli looked about to feed a pass to Sergio Escudero at the penalty spot when Muangthong midfielder Wongsakorn, doing what he does best, tracks back to steal the ball off his feet.

Escudero is an interesting football story. Born to Japanese-Argentinian parents, he developed with J.League's Urawa Red Diamonds youth system, debuting with the Reds in 2005. He was at one point called to Japan's U23 national team.  After playing with a few J.League teams, Escudero moved to play South Korean football, before landing in Thailand.

The second half saw Chatchai Saengdao replace Brazilian centre back Lucas Rocha  The extent of Rocha's injury is unknown, but the anchor of the Muangthong defence is to undergo scans at Bangkok Hospital.

Muangthong United stepped up the pace and continued to dominate.  At the 63rd minute, Nont Muangngam was unable to keep out Popp's one-time shot from near the penalty spot.  It was an easy goal for the Brazilian after Korawich Tasa cut the ball back right on the doorstep.


Chiang Mai United was able to create some pressure following the goal, but the chances of recovering were hampered when their #10, Tawin Butsombat, was handed a VAR red card after a rash tackle on Poramet Arjivrai.

Popp's second goal came about when midfielder Picha Autra turned over the ball and sent it forward.  Popp then outdanced the defenders to find space for a right-footed shot past the keeper.

Pucha Autra has emerged as one of the top midfielders in the league, and no doubt is catching the eye of Mano Polking, Thai national team manager, who attended tonight's match.

Willian Popp could have had a third when a late penalty was awarded on a handball.  Chiang Mai United's in-form keeper saved both the penalty shot and the attempt by Teeraphol who came charging onto the rebound.

With the victory, Muangthong United finally have a whole week before they play again.  Next Sunday the club goes from bottom to top, playing away against league leaders Bangkok United.