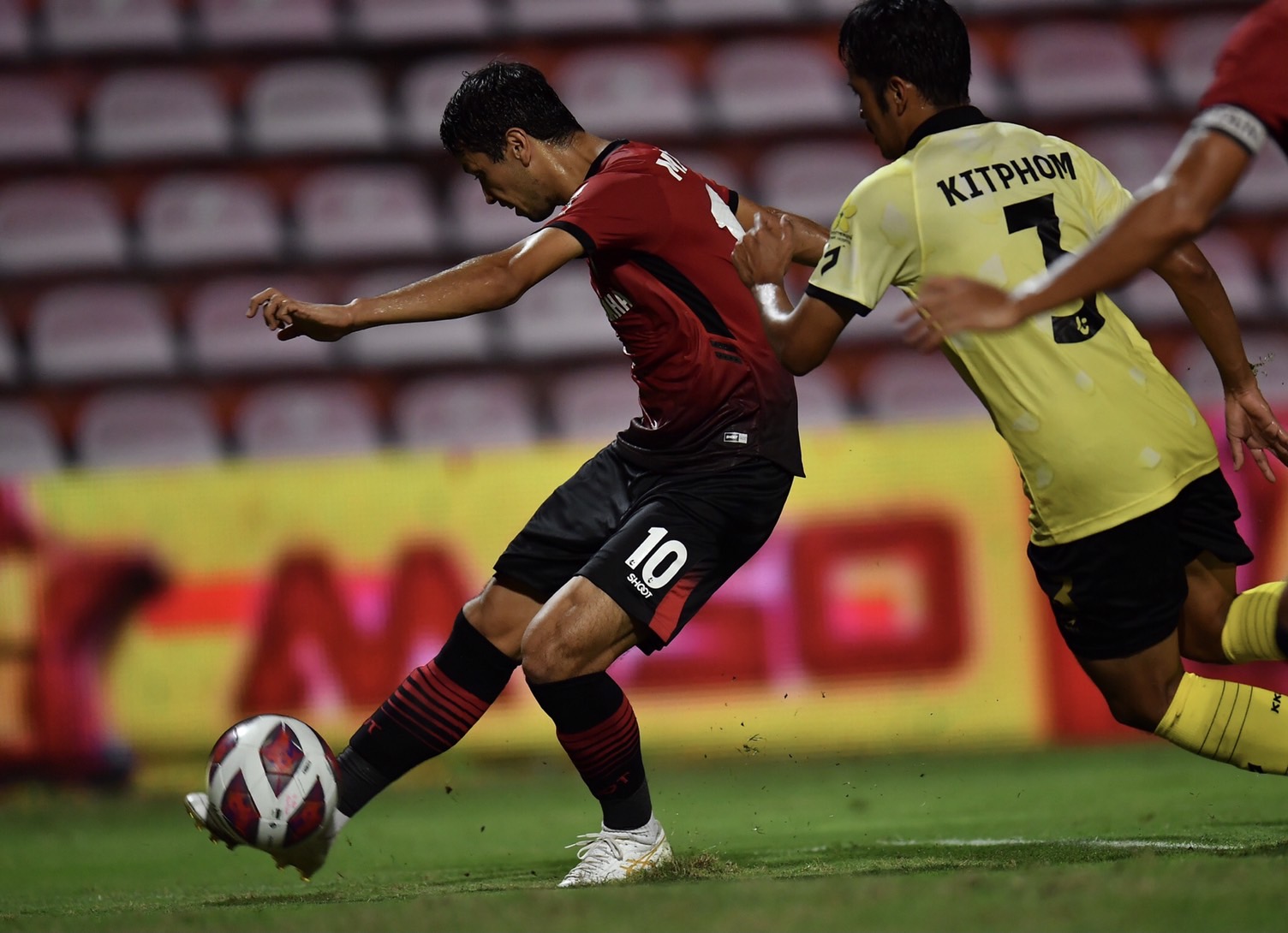 Head Coach/Manager Mario Gjurovski expected more from his players after having not scored from open play in the previous two games.  They did not disappoint, with two goals from Sardor Mirzaev, and the winner slotted home by Willian Popp, Muangthong United played some good football and found their finishing touch.

As well, Coach Mario gave Korrawich Tasa a chance to prove himself by listing him in the starting XI.  The Muanghtong United academy youngster continues to demonstrate his ability to threaten and a bright future lies ahead.

Yet Muanghtong United fans at first thought they were in for a repeat of Tuesday’s match when Khon Kaen jumped into an early lead. Ibson Melo eluded three defenders and found room to launch a left-footed strike from a distance that caught Peerapong Ruennin by surprise.

Willian Popp only added to the angst of fans when he missed a penalty shot, blasting the ball over the bar. Likewise, a header attempt by Adisak Kriason was into the arms of the Khon Kaen keeper, while shots from Picha Autra and Popp were off target.  The halftime whistle saw Muangthong United enter the locker room a goal behind.

Gjurovski, who did not start the game with Sardor Mirzaez, brought the Uzbekistan national team striker on at the start of the second half.  Whether it was the rest or time to ponder life as a bench player, Mirzaev quickly had an impact.  At minute 53 he deftly side-footed in the cross from Boontawee to equalize.

Just a few minutes later, Lucas Rocha’s header from the corner kick was off the post.  Mirzaev pounced on the rebound, beating defenders to the ball and turn the shot home to put Muangthong in the lead.

Muangthong United’s identity as a second-half team was strengthened as the squad played quality football the longer the game lasted.  Following what’s become known as “Mario’s Style” of fast-paced attacking football, fans were entertained.  A man-of-the-match performance was earned by Picha Autra for continually winning the ball back and moving the play quickly into the attacking half.

The third and final goal came in this style.  Starting from their own goal line, Muangthong played the ball forward, quickly storming towards the opponent’s box with an army of attackers.  Boontawee had his second assist when he cut the ball back towards Willian Popp who slid the shot off the far post to make it 3-1.

Said Gjurovski, “Amazing goal from Ibson, and we were one down like in most games, but this time we missed the keeper several times to score the goals.  I am confident we can play better and win more games.”

Gjurovski also had high praise for Purachet Thodsanit, as the 20-year-old academy player had his first-ever appearance for the club.   “This was special for me as a coach and for our academy, and it’s a message to all the academy players to keep working hard, don’t slow down, and your chance will come.”

Muangthong United will play again in three days in a re-scheduled game with BG Pathum United.  While no spectators will be permitted, the match will be broadcast in Thailand on AISPLAY and TV5HD1.