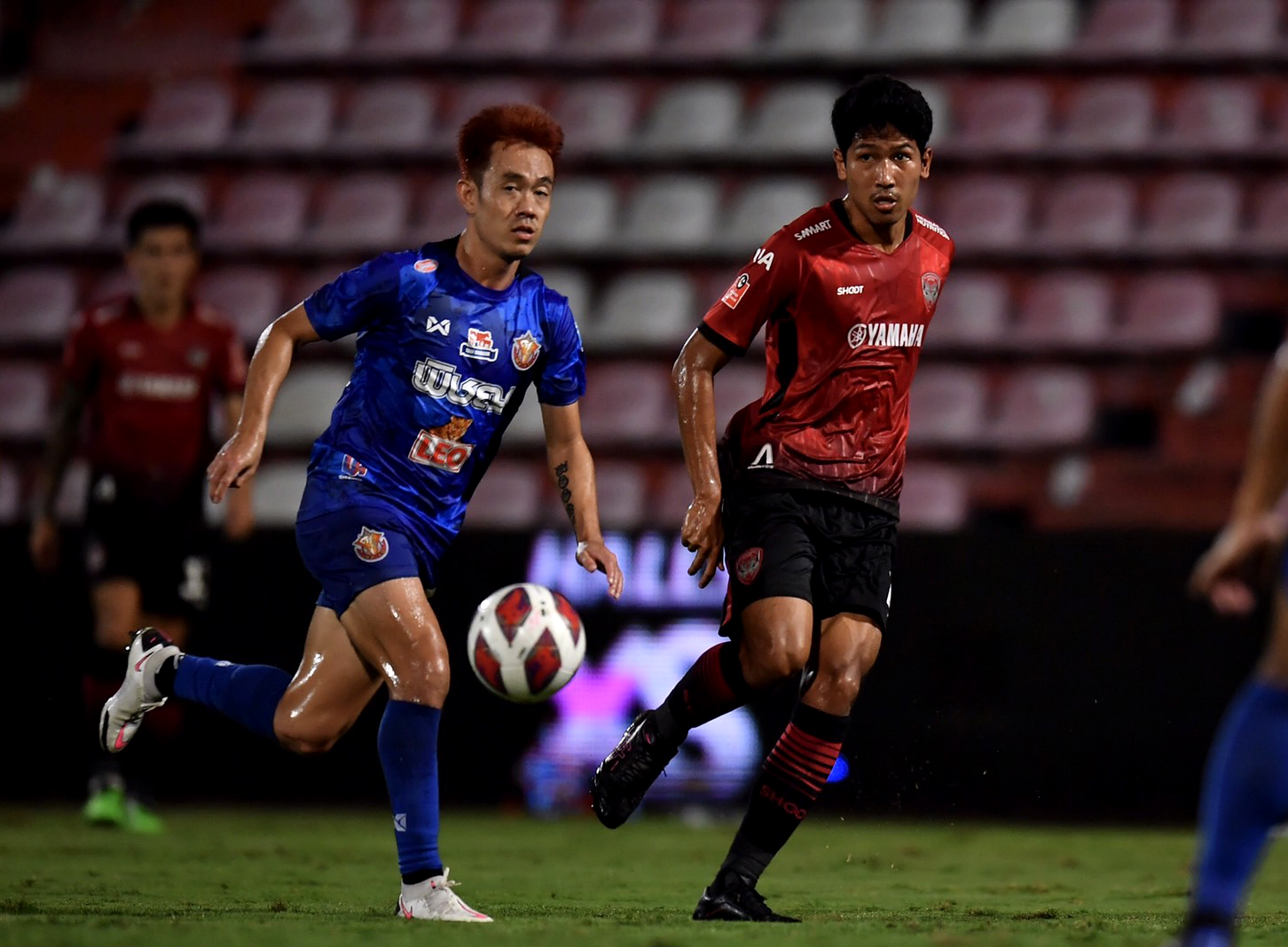 Coming just a few days after a tough battle with Port FC, the match with Nongbua at the Thunderdome Stadium was the first home game with spectators.  With numbers limited to 25% of stadium capacity, it was a sparse crowd for the Tuesday night kickoff.

Head Coach/Manager Mario Gjurovski decided to rest some of Saturday’s starters, with Jesse Curran and Poramet added to the first eleven. Muangthong United play five games over three weeks, including a rescheduled fixture and an FA Cup tie.

With the kickoff whistle, Nongbua FC was quick to score.  At just two minutes in, a weak pass across the box allowed an attacker to gain control with the keeper out of position.  Centre back Chatchai scrambled to recover, causing a foul and the referee’s arm pointed at the penalty spot.

Just ten minutes later it was Muanghtong United’s turn.  Adisak Kraison was knocked to the ground, and after viewing the VAR footage the referee once again highlighted the penalty spot.  Muangthong United’s #10, Sardor Mirzaev, who had yet to find a goal, stepped up and equalized.

The haphazard and wobbly start gave way to more settled play and Muangthong United began to dominate.  Willian Popp and Jesse Curran looked to create chances, with the Australian winger seeking to find the Brazilian in the box.

Sardor Mirzaev struggled to find the form that led him to be the club’s top shooter last season, and the half ended with neither team producing any decent chances.

Gjurovski looked to ignite a change with Picha Autra added to the attack with the start of the second half.  Despite control of possession, chances were lost with shots wide or into the arms of Jamsuwan, the Nongbua keeper.

With time starting to wane, further rounds of substitutions failed to produce the winner.  In the end, it was a disappointing single point match, with the lack of finishing an obvious area of concern for Coach Gjurovski to address.

Said Gjurovski after the match, “So many chances, and we played better in the second half, but it’s not enough to dominate play if we don’t score goals, simple as that.  The second game in a row where we can only hit the keeper.”

Muangthong United will host Khon Kaen United at the Thunderdome Stadium in just a few days, and no doubt the focus in training will be to polish the finishing.  Tickets for Saturday’s match will be available soon at thaiticketmajor.com either online or in-store outlets.