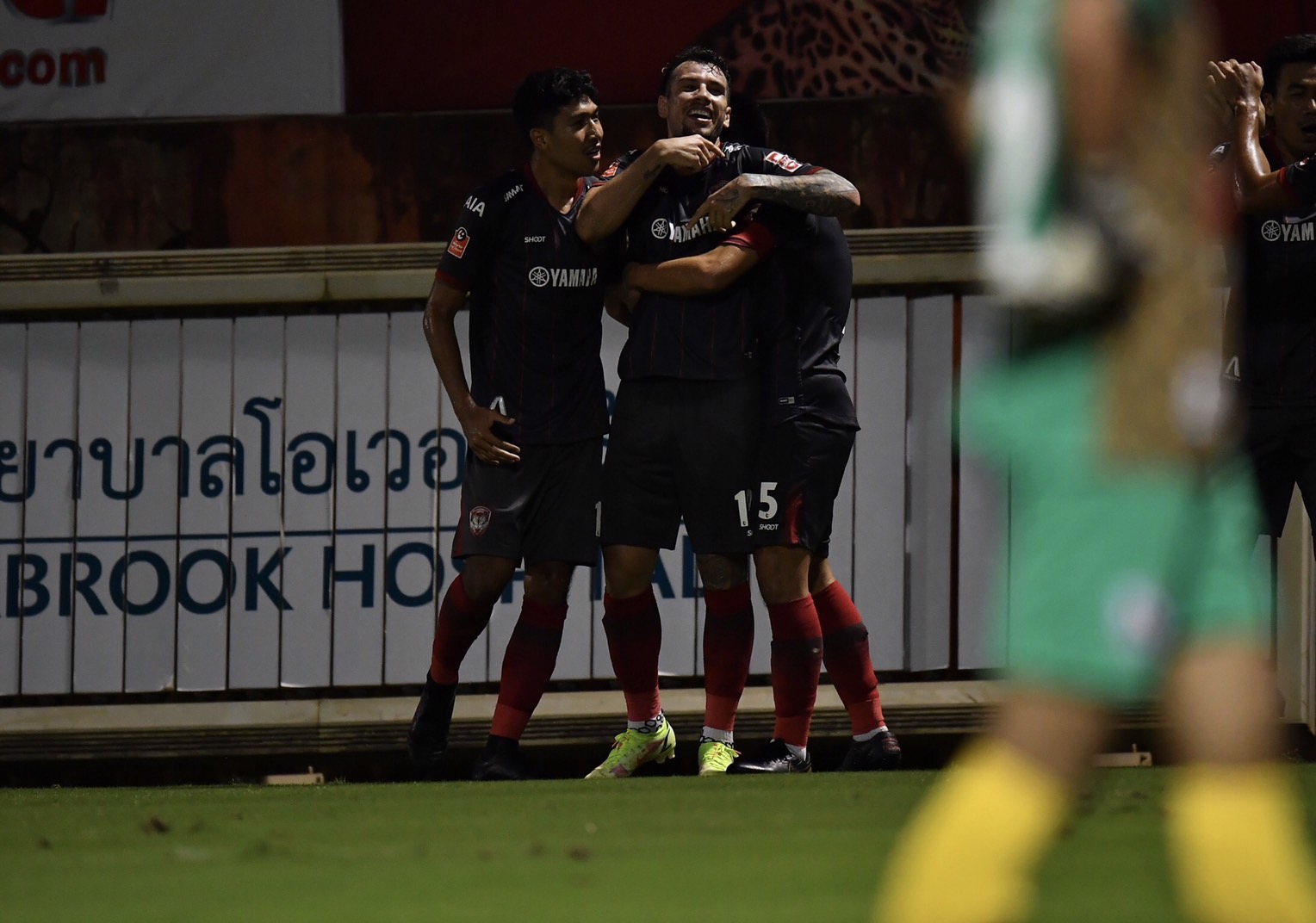 Muangthong United won a thriller of a match, defeating Chiang Rai United 1-0, after being down to 10 men since the 13th minute, scoring the winner in the third minute of added time.

This was Muangthong United's second away match in a row and their fifth game in three weeks of a brutal schedule.  To try and field as much power as possible, Head Coach Mario Gjurovski rotated Marco Ballini into the starting eleven, allowing Chatchai Saengdao to rest.

Yet in the thirteenth minute Ballini was red-carded after his tackle saw Chiang Rai's big Brazilian attacker, 'Bill', tumble.  Ballini's foul was not egregious, however, as he was the last man back the referee deemed it worthy of a straight red.

This was the end of Chatcai's rest and the centre back was back into the fray sooner than expected.

Last season's FA Cup winners began to dominate play and keep Muangthong United pinned into their own half.   Solid defending and close marking denied Chiang Rai any decent opportunity at goal, and the half ended 0-0.

During the interval Gjurovski pep talked his players, telling them to believe in themselves as good enough to hold for the point, and to fight hard.  Importantly, he told the squad to be ready for any counterattack opportunity, should it happen.

The squad put forth a tremendous effort and were able to deny Chiang Rai.  Keeper Peerapong made two super saves in a row, first blocking the shot from Bill from close in, and regaining his feet able to steer the ball over the crossbar on the rebound.  Each player put in a supreme effort to defend, with the midfielders dropping deep and pressuring, and wing backs Suporn and Boontawee blocking many attempts to cross.

Worrying for Muangthong United is the condition of Boontawee who twisted an ankle while executing a tackle and had to leave the match. Coach Gjurovski brought in Jesse Curran to bolster the midfield and Picha dropped to the backline to take up Boontawee's position.

Willian Popp, who had been given the yellow card, received a second dose as he jumped to head the ball.  The referee thought that Popp had deliberately elbowed his opponent in the fracas, however, upon review of the VAR footage reversed the decision and Popp was able to stay in the match.  Popp himself had been the victim of an elbow to the face in the first half, an infraction that went uncalled as it was slightly away from the ball.

At the 90th minute, the referee added an amazing six minutes of time due to the VAR review, and also the injury to Boontawee.

Then at the 93rd minute, a counter-attack opportunity emerged and Muangthong suddenly overwhelmed Chiang Rai.  The ball was played up the middle to Adisak Kraison who laid it out on the left wing for Popp to run on to.  Popp then crossed the ball over to Curran at the edge of the box. A back-and-forth with Teerapol, and then Curran chipped the ball towards the far post and Popp was there to dive onto the header for the goal. 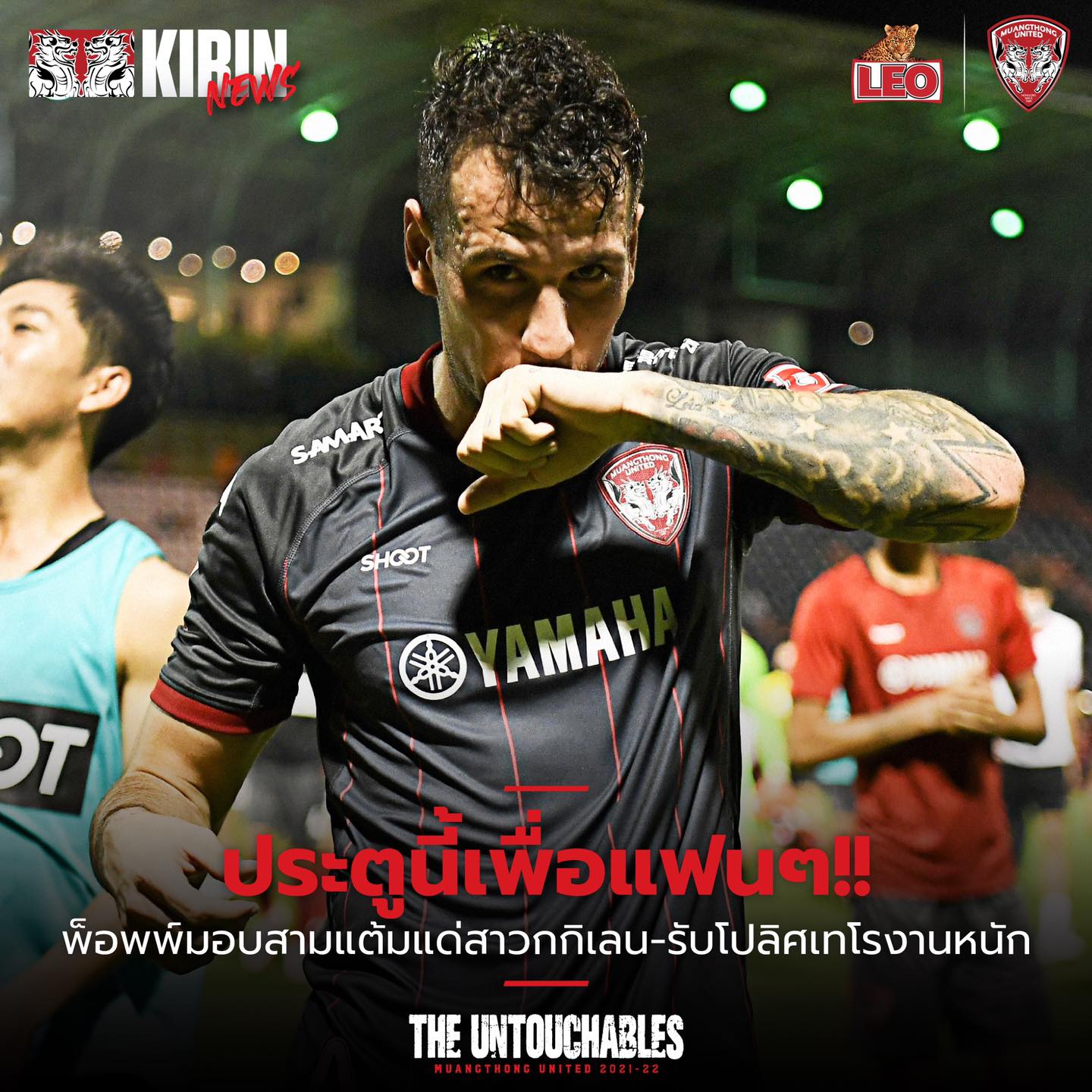 Muangthong were able to hang on for the remaining three minutes and won an epic encounter.

Said Gjurovski after the match, "I always believe in my players, they can do this, and today we show everyone we can defend and fight for the full match."

Muangthong United play again Saturday against Police Tero FC at the Thunderdome.  Tickets are available through thaiticketmajor.com or on matchday at the stadium.