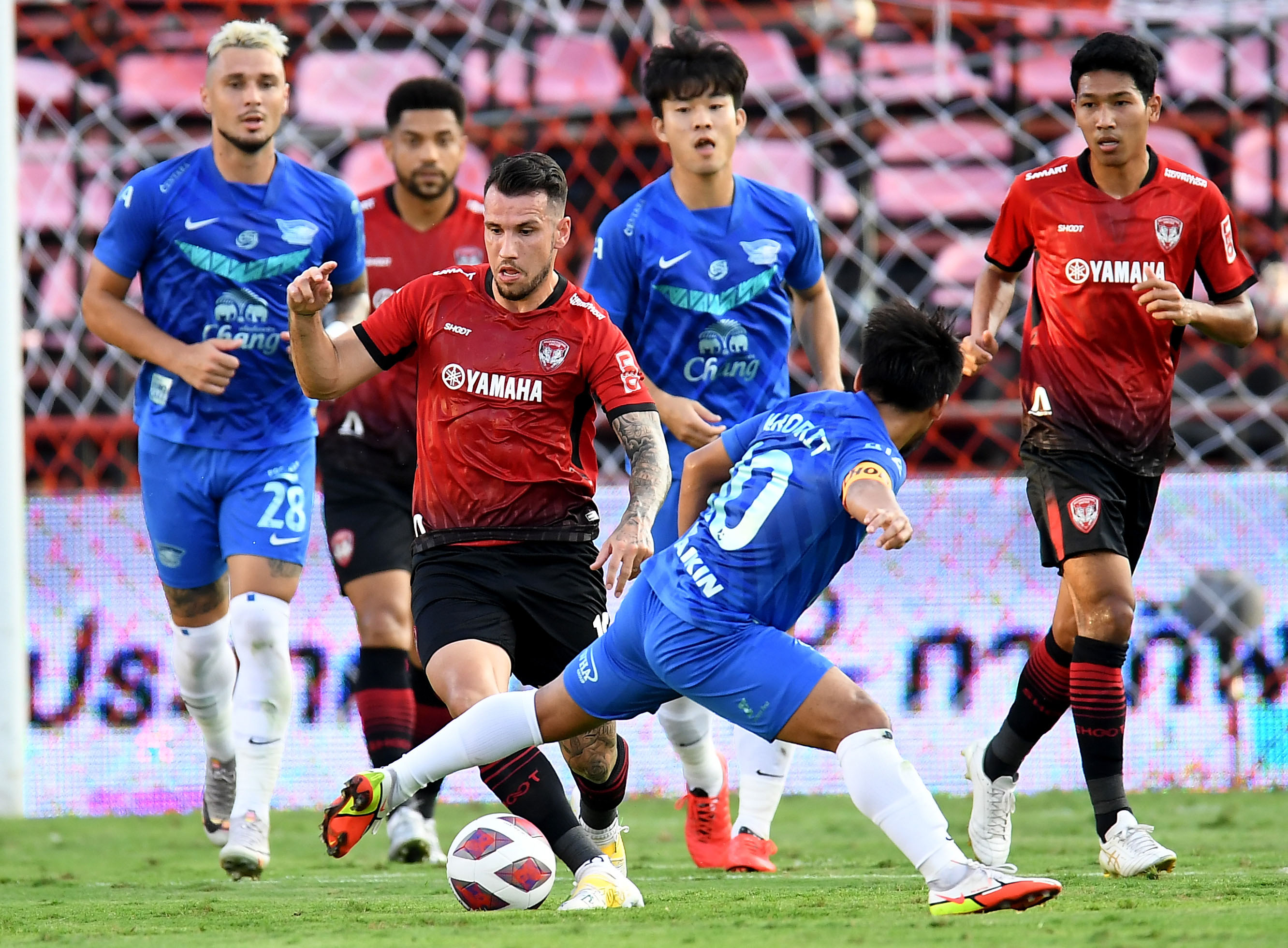 Muangthong United was able to salvage a point after three second-half goals equalized the score against Chonburi FC.

The match that is known as the Thailand Classico featured two of the founding clubs of Thai professional football.  The match featured plenty of drama, and VAR was to play a major role in the outcome.

The game was an even affair during the first half with neither club having dominated.  Chonburi FC played an organized game that kept Muangthong United defending deep, but the Kirin were able to generate attacks. A good chance fell to Poramet near the penalty spot but he was unable to get off a clean shot.   VAR officials called the referee to a potential handball on the play, however it was ruled as unintentional.

Chonburi's Korean midfielder Yoo Byongsoo opened the scoring at 25 minutes in a goal that VAR confirmed, after a painfully long wait, there was no offside. As well, a handball in the lead up to the play had not been called, leaving Muangthong players frustrated by the poor officiating.

Heading into the second half Chonburi applied the pressure and scored two goals to take a commanding 3-0 lead, converting off a corner on the first, and sloppy defending allowed an easy tap in on the second.

Yet Muangthong did not slow down and kept up the pressure.  Head Coach/Manager Mario Gjurovski subbed in Picha Autra, Jesse Curran, and Korawit Tasa.

Willian Popp had his second of the season, charging at goal to score from close in, beating the keeper to the ball. Soon after, bringing in Picha proved to be a good move, as he converted a volley to make the score 3-2.

As the game entered the final 10 minutes, Korrawit was upended as he tried to reach the ball at the six-yard box.  The on-field referee called a penalty, much to the dismay of Chonburi FC players.  VAR officials seemed to confirm the foul, although the onfield referee elected not to view the replay, as was the case earlier in the match.  Muangthong United striker Adisak Kraison stepped forward and converted the penalty to even up the score at 3-3.

Following the match, social media was alive with controversy over the performance of the referee team. Mario Gjurovski commented that Chonburi FC had deserved to win the game, and asked the Thai FA why there has not been any training or discussion with clubs about how VAR is going to be used, and what constitutes fouls and handball.   In last week's match, Muangthong United had been the better team but had their victory denied due to calls that were inconsistent.

Muangthong United have a break in action as next week's fixture with BG Pathum United has been postponed due to AFC Champions League action.  The next match will be at the Thunderdome again, this time hosting Ratchaburi FC, Friday, September 24th, 2021, 6 PM kickoff, with broadcast on AISPLAY and Channel 5-HD.  At this moment Thai government rules mean this game will be played without spectators.